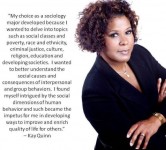 As the founder of Mutual Freedom, Kay Quinn is often referred to as having one of biggest hearts in America. Her spirit of giving has created an active effort promoting human welfare for all. She earned a Bachelor of Science in Sociology from the University of North Texas in Dallas and is currently practicing freelance Philosophy. Committed to assisting and aiding in the sincere needs of human suffering, Quinn designates the largest portion of her organizations income, supported by philanthropic funds, towards services and programs in support of the organization’s mission to aide and assist others.

The daughter of the late Rev. Odell Christian, Sr., Quinn was taught very early in life how to exercise her faith and trust in a higher power above that of her own. Her life has become the gratifying testimony of benevolence by which she lives. A native of Dallas, TX born as the fourth of four children, Quinn grew up surrounded by a nurturing family. She learned very early the true meaning of giving and how fulfilling it was for her. As a result, she accepted that spiritual gift of giving and formed Mutual Freedom, a charitable organization of which giving is its core principle.

As a published author, Quinn’s creative literary work entitled ˜”How Much Does God Cost” has received favorable reviews. She is described as the voice of one crying in the wilderness. Her writing style is described as straight-forward, and she is known to use jarring statements to create a shock effect to capture the reader’s attention.

Quinn raises thought-provoking questions that need to be addressed in light of today’s religious climate. She can be seen in an interview with Deya Direct on Girlfriend FM for Black America Web.com, a website founded by Tom Joyner of the nationally syndicated Tom Joyner Morning Show.

While soft spoken, Quinn has never been one said to be afraid of hard truths.   She is truly a willing vessel in the service of assisting those in need and her heart is as soft as her spoken words.